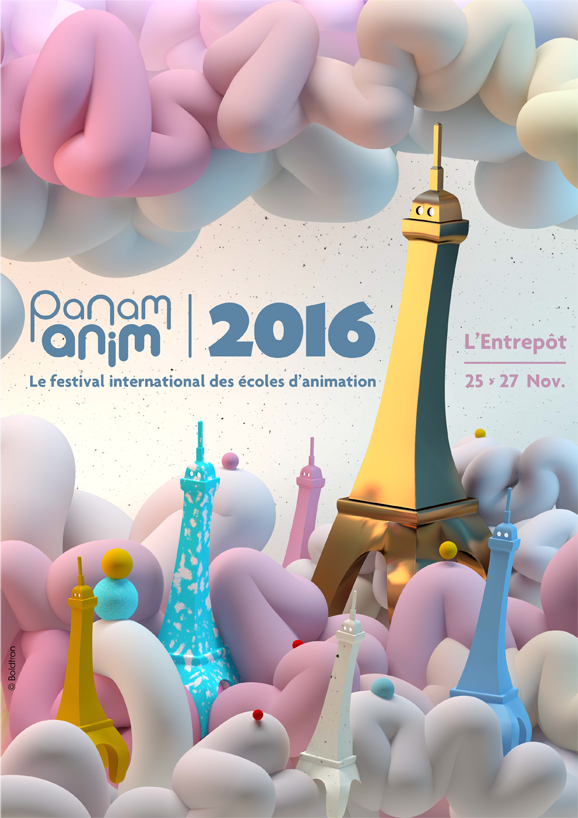 The largely programme spreads now over 3 days and 35 animation schools from 10 countries have joined the ranks of Panam. A selection of 60 shorts graduation films will be put to challenge on 3 competitions (International, National and Motion Design) and evaluated by a professional jury, presided over the French animator and film director Christian Desmares.

The programme also includes 3 parallel sections out of competition, of which 2 adapted to young audiences, master classes, a “carte blanche” to the Jury President, concerts and… a 48 hours Animation Jam during which the 8 participating teams will have 48 hours and all the necessary means to create an animated short film or a video game, with a nice trophy for the winners !

The Professional Jury will have the difficult task to attribute 4 awards to short films of the International, National competition and the Animation Jam, while a second jury will have to reward 2 of the best Motion Design shorts.

Besides the many surprises he will unveil in his Carte Blanche, Christian Desmares, will hold a Q&A with the audience after the screening of April and The Twisted World, the film he codirected with Frank Ekinci, winner of the Long Feature Cristal at Annecy 2015.

After animating the characters of Marjane Satrapis’s long feature Persepolis (2007), Christian Desmares takes on the great challenge to interpret the world of French comic’s artist Tardi for his first feature April and The Twisted World (2015) codirected with Franck Ekinci that wins the Cristal for Feature Film the same year at Annecy Festival and a nomination to the French César the following year.

All competitions are screened twice on different days to make sure everybody can see and vote for the films! An intermission of 10 minutes on each competition will give you enough time to do that!

On site: 5€ per screening

4:30 – ANIMATION JAM KICK OFF!
8 teams listed for this 48 hours creative challenge to make an animated short film or a video game

7:40 – 9:40 PM: ENCORES!
Because there can never be enough… 1 additional screening out of competition for a complete panorama of the student creation worldwide

AWARDS
(the Festival and Animation Jam awards are all endowed)

COMPETITION
• JURY AWARD
• BEST ANIMATION
• BEST ARTISTIC DIRECTION
• SPECIAL MENTION OF THE JURY
Festivalgoers are invited to vote at the end of each screenings to grant the AUDIENCE AWARD to the films in competition.
ANIMATION JAM
• BEST SHORT FILM
• BEST VIDEO GAME